Local Maggie Valley native, Bob Plott, grew up with an understanding of his family’s historic role in this corner of the Smoky Mountains, but it wasn’t until his son was born – and he passed on his last name – that he came to fully comprehend the significance of the Plott legacy.

“It was something I took for granted when I was very young,” Bob admits. “But when I had my own son, it made me realize that no one had really told these stories.”

The stories Bob is referring to are tales about the connection between his great-great-great grandfather and North Carolina’s official state dog, the Plott Hound. Johannes George Plott, was one of many Germans who emigrated to America in the 1700s, eventually making his way to the North Carolina Smoky Mountains. And he brought with him a group of Hanoverian hound dogs that would go on to become one of the world’s premiere big-game hunting breeds – and also carry on the name of Plott.

These unique brindle-colored hounds were devoted to their owners and proved themselves invaluable as a hunter, herder, and protector, becoming an essential part of survival on the early American frontier.

The Plott Hound’s Journey to America

The heartwarming American story of the iconic Plott Hound started with the love between a boy and his dogs. Johannes sailed from Germany to America with his dogs and his brother. Conditions on the ship were not ideal, with rancid food and contaminated water. Johannes’ brother tragically died during the voyage and was buried at sea. But Johannes, in the company of his devoted hound dogs, carried on.

He and his dogs arrived in Philadelphia in 1750, where they made their way to New Bern, NC and eventually settled in Cabarrus County. Johannes met and married his wife Margaret, and they bought a farm together, where he raised a family. He also used his faithful dogs as the foundation stock for the purebred Plott Hounds that we know today.

“What sets the Plott Hound breed apart from other purebred dogs is that their bloodline is Germanic,” Bob explains. “Most American purebred dogs are from British descent. The Plott Hounds have a beautiful brindle coat, but it’s their tenacity, loyalty, and intelligence that really sets them apart.”

As Johannes grew older, his son, Henry Plott, began to take over the breeding of the dogs. There was constant migration on the American frontier, and eventually, Henry and his wife, Lydia, moved to Haywood County, bringing their beloved dogs with them. When they settled in what is now known as the Plott Creek area, local farms were being threatened by bears, wolves, and coyotes.

Pretty soon word spread about Henry Plott’s brave and athletic dogs, with their keen hunting instincts, and neighbors began to call on Henry to help protect their farms and livestock. Throughout their history, Plott Hounds have been known to not only protect livestock but also children. Many a story has been passed down of a Plott Hound being left to stand guard over the baby while the parents worked the fields.

“These dogs are fiercely loyal,” says Bob. “When you raise a puppy, he or she will be devoted to you. Growing up, if I had to be disciplined, my mother or father would have to take the dog out of the room. It was always just fiercely loyal and so smart.”

Today, Bob continues to tell the stories of his heritage, keeping his family’s Smoky Mountain legacy – and the legacy of the Plott Hound – alive. The U.S. Park Service even named three peaks in the Balsam Mountain range as the Plott Balsams. If you’re traveling down the Blue Ridge Parkway, you can pull over at the Plott Balsam Overlook for scenic mountain views of these stunning peaks.

Now, over 200 years later, descendants of Johannes and Henry Plott, continue to breed these spectacular dogs, who hunt bear and other big game throughout the Great Smoky Mountains. In 1946, the United Kennel Club recognized them as a breed, and the popularity of these intelligent, alert, confident, and loyal hounds has grown.

Bob explains how the breed has evolved over the years. “Plott Hounds were herders and protectors, but they’re adaptable. Maggie Valley is no longer frontierland. It’s a mountain town with locals and motels for visiting tourists. But the Plott Hounds continue to call this area home. They’re still great hunters, but now they’re used for a wide range of purposes, like search and rescue dogs with wildlife operations.”

With such a keen intellect and excellent instincts, the Plott Hounds are able to evolve and use their skills in any number of ways. But one thing will never change – they will always be a faithful and devoted friend to whoever is lucky enough to own them.

Meadowlark owner, Joseph Franklyn McElroy, hosts Gateway to the Smokies Podcast – in this episode, listen in to the full conversation with Bob Plott and find out more about the amazing Plott Hound! 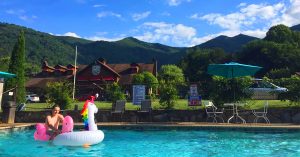